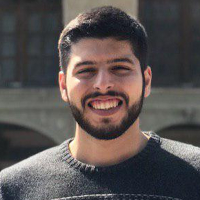 Amirhossein, Quiet in the Waters

I want to tell you a brief story. Of Amirhossein Saeedinia. You know the end of this story. It’s not possible to say everything in one piece of writing, meant for just a few minutes of reading, and from the viewpoint of just one person. But the story goes thus:

He was in love. It was the heyday of that popular tune 52-hertz Whale. The song’s name referred to a massive whale that had gone undiscovered for a long time because it called at an unusual frequency, much higher than other whales who travelled the same waters. They say that from the late 1980s, many marine biologists had heard the call of this creature, but no-one took it seriously. It might well be the only whale that produces such a sound. In the deepest and bluest of the oceans, this whale appears suspended in a vacuum. It shouts, it cries – but no human or animal hears it. They call it “the loneliest whale in the world.”

Amirhossein had told his university friends he wanted to compose a piece on the Persian setar, based on the sounds broadcast by the lonely whale. As if he wanted to join its chorus himself. From the day he was born, he always had the habit of falling for something and not letting go; going deep. He was a child of 1994. A child of the Persian month of Khordad. June 19, 1994.

Amirhossein was born in the city of Ahvaz, in Arya Hospital. By the time he turned six, everyone was sure he was ready to start school a year early. They told him he could skip classes. Teachers at Pirooz Kianpars school still remember Amirhossein, particularly his strange questions. He always got good grades without working hard, but who could deal with all this curiosity, all the new questions he had every other day? The teachers got fed up sometimes.

So he started school early and soared though his classes. He made it to Amin Middle School. Before long, he took the entrance exam for the elite high school, Navide Salehin, and got through. In fact, Amirhossein advanced so fast that, in year 10, when he scored highly in the school’s Physics Olympiad, they had to bar him from going straight to the provincial stage. He was too young, they said.

This didn’t deter Amirhossen, but the wound of being put to one side, of being excluded and remaining alone, was ever-present in his works, words and interests. No one remembers when exactly he learnt computer programming, nor when his English became so good that he could study the latest astronomical discoveries that he downloaded at great pains, using VPNs to circumvent government censorship. But we know he was still in the early years of high school when he began teaching English, astronomy and computer programming. He gathered other young people his age and passionately shared with them all he had learnt.

No one was surprised when he scored so high in the national university entrance examination that he got offers from Tehran’s elite Sharif University, to study physics, and from Ahvaz University for oil engineering. He picked the latter because he wanted to be with his family: with his father, his mother and his only brother, who has autism.

There was never an idle moment. He scored plus eight on IELTS and taught English professionally. He finished his courses quicker and faster than anyone else, while also helping his friends get placements at universities abroad. Meanwhile, he also taught maths and physics at the private Qalamchi Institute. He was still doing his bachelors’ degree when he became the youngest researcher and speaker at Khawrazmi University’s conference in Damqan. He graduated second in his class in mechanical engineering. Many young people his own age, who were his students, still remember him as a quiet and reserved man, always smiling, intelligence radiating from his face. When he taught, it was obvious that he was different, and that he thought differently to other teachers and professors.

Amirhossein had given medicine some thought but in all the years that passed, he never considered the subject seriously. After he got his bachelor’s degree, he received an email offering him a place at University of Wisconsin-Milwaukee.

These were strange days in the United States. Trump’s election had shocked American society and in time, it would affect the future and destiny of thousands of migrants. The university allowed Amirhossein to defer for a semester to arrange his scholarship and a visa. But as the value of Iranian currency fell, the cost of migration went up day by day. His family didn’t complain, but those who knew him weren’t surprised when he said he wouldn’t want to study in the US if it meant paying too high a price.

There were 40 days left before the nationwide Masters’ degree entrance examination in Iran. It was enough for Amirhossein. He took it and was accepted medical engineering degree at Tehran’s Amir Kabir university. He now had the opportunity to focus on the human body, a field at the intersection of medicine and engineering.

His studies on the knee joints and the vertebral column amazed his professors. Like always, he was never without something new to say, and a new discovery to share with his friends. And he carried on teaching. This was the best place in which he could fill the distance he always felt with others with something meaningful and worthwhile. Not that he had any problem connecting with others, but all the tumult in his complex mind meant he couldn’t engage with the ordinary, quotidian problems of human life. Like that whale, the frequency of his call was too high-pitched for most.

In the last year of his masters degree, as Amirhossein was working on his dissertation, research and teaching, he also took the TOEFL exam and got 114: a grade normally far beyond the reach of those whose mother tongue isn’t English. With Trump in power, the political conditions worsening in Iran, the university atmosphere coming under worse and worse scrutiny and his conscription date approaching, Amirhossein decided to apply for mechanical engineering PhDs in Canada.

Two professors in Vancouver accepted him but couldn’t take him immediately. He corresponded with Professor James David Hogan of the University of Alberta in Edmonton. The two came to such an intimate understanding that even an offer from the University of British Columbia couldn’t change his mind. They were both young and seemed to understand the special language of their unusual brains. They could hear one another’s frequency.

“A week before the flight, he brought his suitcases and started gathering his things,” says his mother, the woman who made sure his voice wouldn’t go unheard following the crime. “He was very happy to be achieving his dream. He bade farewell to his friends. He finished all he had left half-done, and promised his friends and classmates that he would soon gather them together in Canada.”

“In the first minutes of January 8, we went to the airport. It was very crowded and it took a while before we could check in his luggage. At 5:15 am on January 8, he said goodbye to us. He repeatedly asked his father to take care of his mother. ‘I’ll call you from Kiev in four hours,’ he said. ‘Wait for me,’ he said. He went toward the gates. He called again from inside the plane. Two passengers had had to get off, and this delayed the flight.”

Much is unsaid and obscured in this story. There is no doubt that no security body in the world could keep this hidden forever. The survivors of this crime are still trying to get answers to their most basic questions. This will be a long story.

But I started my story with his falling in love. Am I allowed to speak of that? I’ll leave it at this: When he got on PS752, he was still in love. A love story that didn’t end with him leaving. It might continue, even now.